In just over six months from now, the full impact of the Government’s review into the impact of the new WLTP emissions testing regime will be felt for the first time, with a freeze on BIK rates for two years and zero tax rates for electric cars. Here we assess the implications for companies and their drivers.

In July, the Government announced the results of its eagerly anticipated review into the impact of the WLTP emissions test on company car tax rates, which was predicted to see the CO2 rating for most cars increase by 15-20%.

As a result,  from next April, there will now be a freeze on the existing scale charges for all company cars  for the next two tax years, 2020/21 and 2021/2022, so the good news is that existing company car drivers should not see any  inflationary impact on their tax bills for the next 30 months.

At the same time, a new deadline of April 6, 2020 has been introduced. Basically, cars purchased after that date get a 2% tax cut compared to cars purchased before that date – prompting some critics to suggest that the move will be a dampener on new car orders until next April.

From 2023/24 onwards, the Government says that fleet managers and company car drivers will be able to refer to a single BIK tax table again as all rates will then be realigned.

The rates for the following years are still unknown and haven’t yet been announced by the government.

The other good news for company car drivers thinking of ordering an electric car as their next vehicle is that from this April they will benefit from a zero rate of tax in the first year of ownership, 2020-21, provided the car in question has zero CO2 emissions.

The electric range of the vehicle is not taken into account if it has zero emissions. However, for cars with an electric range of greater than 130 miles and ordered after April 6, 2020, the scale charge will also be 0%. 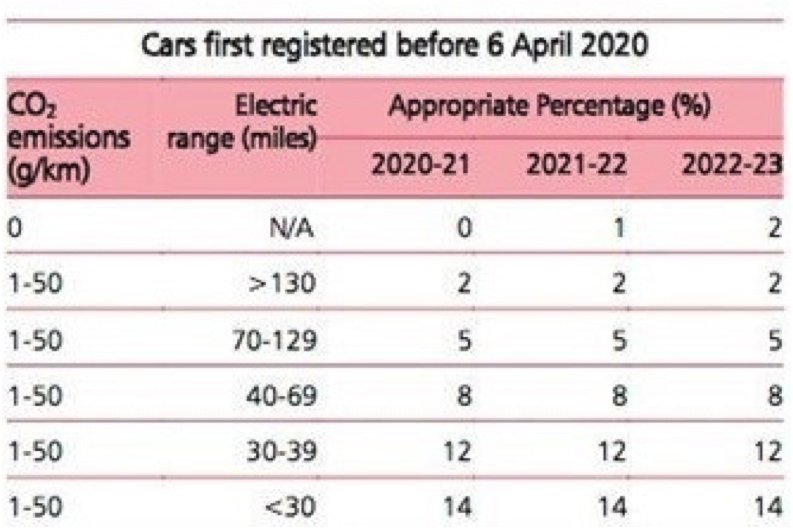 Mike Manners, managing director at CBVC Vehicle Management, said: “The results of the Government review and the new BIK tax rules should hopefully be a much needed shot in the arm for most drivers, as well as recognising the important role that companies play in the move towards a zero carbon future.

“Hopefully, the new zero tax rates for EVs will kick-start the EV market which has been waiting for some kind of stimulus, while it is also great news that the newest generation of clean diesels will not suffer a 4% surcharge, as we believe that diesel still has a part to play in the fleet mix.

“However,  the new tax regime adds a layer of complexity which decision-makers will need to understand  before communicating with their drivers, and we would urge  fleet managers to talk to their fleet management supplier as soon as possible to understand the full impact of the new moves,” he said.